So the attacks on Amazon's treatment of Hachette continue to drag on, despite the fact that self-publishers are sick of talking about it and the defenders of "literature" (traditional publishing) have nothing new to say.  And by nothing, I mean absolutely nothing.

If you have any confusion about what the Amazon vs. Hachette controversy is really about, just read Clay Shirky's piece about it.  Betraying his own privileged class, he makes the persuasive argument this is simply the New York literary establishment huffing and puffing because Amazon doesn't treat them like the special snowflakes they believe they are.  Interestingly, none of the special snowflakes have argued with his conclusions, just as they rarely acknowledge all the other compelling arguments against their talking points.  That leaves them with nothing to do but regurgitate the same questioned "facts" that expose the same imaginary crisis, repeat the same flawed logic as to why anyone (but them) should care, and come to the same refuted conclusions as to the need for immediate action.  Different members of the literary establishment faithful step forward to refashion it in different "important" magazines and editorials they control, as if any of this was revelatory or newsworthy.  They seem to be hoping they will all be standing on each other's shoulders to scale the wall of public opinion, but they simply sink into the same mud hole and disappear.

The latest, with the melodramatic title "Amazon Must Be Stopped," is by Franklin Foer.  It's the cover story for the New Republic (but who would know because print is pretty much dead).  It's already been torn apart by better minds than mine.  Here's a solid fisking by self-publisher Barry Eisler.  Here's a legal take down by Maxwell S. Kennerly, Esquire.  And here's the tech perspective by Reihan Salam.

Other than an unenlightening, and inaccurate, rumination on the history of anti-trust laws, there is  nothing in Foer's piece that hasn't been covered repeatedly in previous anti-Amazon pieces.  The main talking points were argued (slightly better) by George Packer in his New Yorker Amazon hate letter, "Cheap Words," six months ago.  I pulled that apart when it first came out so it seems pointless to repeat myself now.  Packer's arguments weren't persuasive six months ago, and they aren't now with Foer plagiarizing them (or plagiarizing the others who did).

So what are we on the side of self-publishing, those of us who don't believe that Amazon is going to destroy "literature," those of us who believe Amazon is one of the best things that happened to books since the paperback novel, supposed to do?  Do we simply ignore this constant repetition of failed arguments by the New York literary elite and hope our silence won't be mistaken for agreement?  Or do we continue to repeat the same defense against the same attacks?  At this point, it's clear the special snowflakes aren't going to give up anytime soon, but it would be nice if we indies can return to the business (or hobby) of actual writing.

So to save everyone time, especially myself, I've invented the Amazon Fear-O-Matic.  Rather than arguing this nonsense beat by beat, I can just plug in the quotes and the Fear-O-Matic does the rest.  So, without further introduction, here is Foer's piece in simple graphic form (click to enlarge): 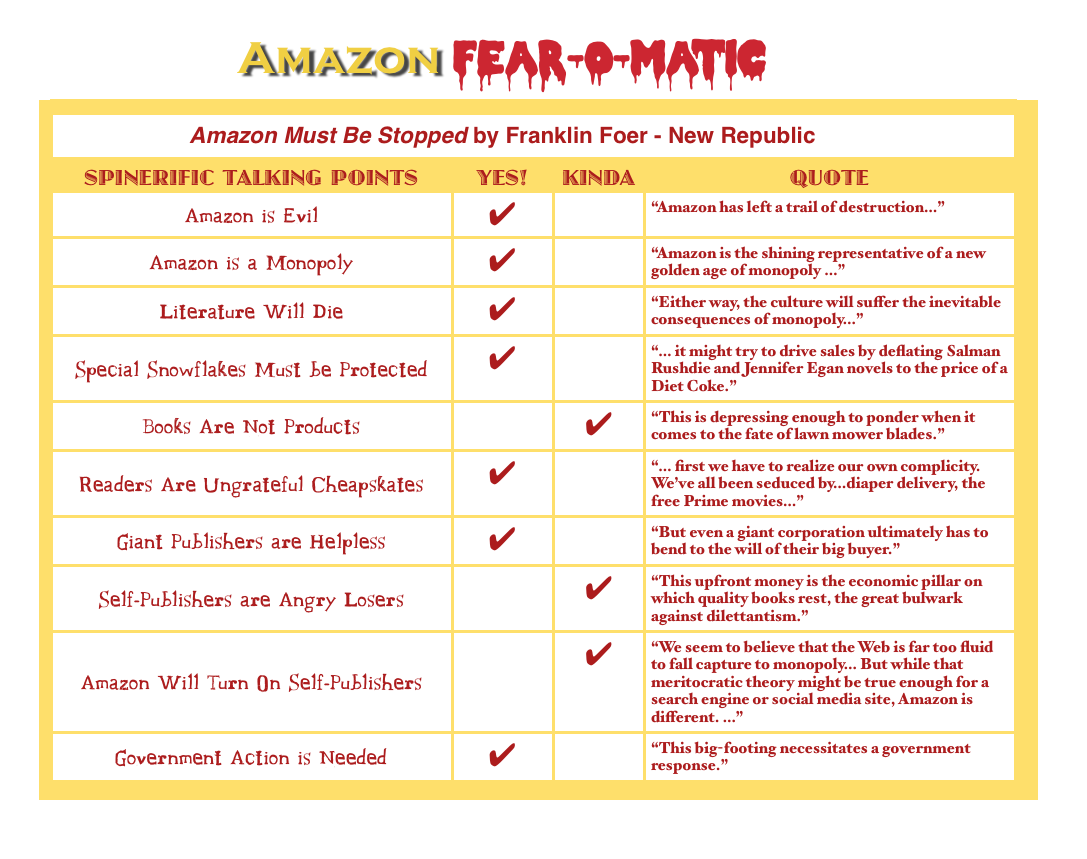 Foer hits a solid 8.5 on the Fear-O-Matic by nailing seven out of ten anti-Amazon talking points and hinting about (for half a point each) the other three.  Excellent fear mongering!

Now that FOM has covered the basics, let's chat briefly about some of the oddities of Foer's piece.  The little original touches that allow us to read between the lines into his real thinking.

NOTHING ABOUT AUTHOR'S UNITED: Oddly, Foer goes way out of his way not to mention that this debate has already been raging for about six months and Douglas Preston formed a group to try to solve the very problem Foer thinks is so serious.  It's one thing not to acknowledge the arguments of your opponents, but he doesn't even mention his supporters.  Or the fact that a $100,000 full page ad was taken out in the NY Times highlighting his concerns. My conclusion from this is that the entire AU campaign is perceived as an embarrassing failure, even by the NY literary establishment, so Foer prefers not to bring it up.  Whatever his preferences, Foer's unwillingness to provide a bigger context for his argument show he isn't really serious about it at all.  He doesn't believe what he's saying, it was simply his turn (as a member of the NY establishment) to write about it.

BIG FIVE POLITICAL POWER: There's an odd mention of the fact that these giant publishing corporations, who supposedly are powerless against Amazon, have political power of their own.  The line is "Even though the five major publishing houses have political connections and economic power of their own, they just can't compete."  The line about political connections kind of comes out of nowhere and is quickly dismissed.  Why is it there?  It would have been enough to say the Big 5 don't have the economic power to stand up to Amazon (even if it isn't true).  Is this a hidden warning to Amazon?  Hey, the Big 5 have politicians and judges in their pockets like so many nickels and dimes?  Or is Foer lamenting that the Big 5 are unwilling to use their political connections to stop Amazon?  (Perhaps because what they want is so unreasonable, even politicians with juicy book deals can't agree to it.)

One explanation for the special snowflake's hysteria about Amazon is that execs at Hachette (and the other big five) have been lecturing them that if they don't do something about Amazon, the big publishers will be forced to punish them by cutting advances and promotion and embracing all those smart self-publishers who don't demand special treatment.  In other words, the real threats are coming from the big publishers through the NY agents to the trad writers (and their literary supporters).  "If you guys don't save yourselves, don't expect us to save you."  This sounds pretty plausible to me.  So Foer's comment about big five political power might be a reveal that the traditional publishers have already told the special snowflakes that they are on their own.

THE BIG FIVE MIGHT CUT ADVANCES:  Foer also oddly states that publishers might be forced to cut advances, and that will end literature as we know it.  It's a very strange argument, as others have pointed out.  First, there's obviously no connection to advances and great literature (big advances usually go to politicians, thus the big five's political clout, and celebrities like Snooki).  Obviously, great literature was written in the past without advances and clearly will be in the future.  So why does Foer focus so much on advances?  Perhaps because advances are exactly the kind of perks that the NY establishment loves.  They aren't connected to actual sales.  They are simply rewarded to the favored.  Like, say, when the editor of the New Republic writes a little book on the side.  Like say, Foer's book on soccer and economics.  The kind of books one really shouldn't expect to compete in the messy real world for readers and royalties based on sales.  Isn't it better that those kind of books are given a nice advance check so the writer feels they accomplished something and can quickly return back to their journalistic musings about why advances are so important to literature?

Overall, some nice fear mongering laced with hidden hints about the pressure the Big Five is applying to a terrified NY literary elite.  For comparison, let's quickly see how it stacks up to George Packer's original anti-Amazon piece.  After all, he also seemed awfully worried that fine journalists like himself might miss out on those book advances: 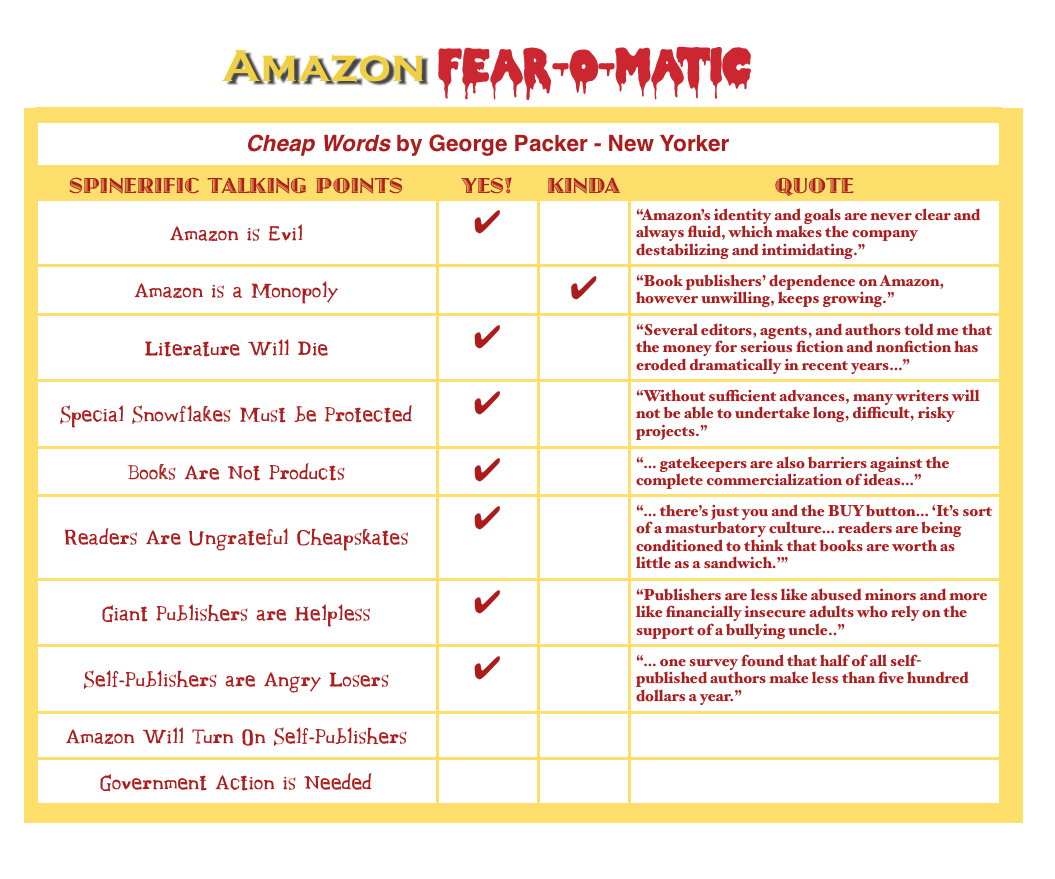 Packer's piece scores a 7.5 FOM, which is high but not as good as Foer.  But, in fairness, Packer's article supposedly wasn't an opinion piece and had to at least pretend to be following some journalist standards.  Because of that, Packer only hinted Amazon was a monopoly (because, by any objective standard, it clearly isn't).  Moreover, Packer's job was to set the stage with "serious reporting" so others could jump in and demand government action to solve the "problems" he supposedly uncovered.  So he lost a point there.  Finally, he didn't touch on the idea that Amazon would turn on self-publishers and that cost him a full point too.  But, also in fairness, Amazon turning on self-publishers does seem to be the one new idea that took a little time to percolate with the anti-Amazon crowd.  So Parker had a disadvantage cutting the trail others would follow.  All in, solid fear mongering that set the standard for what has come since.