One would have hoped Amazon's new deal with Simon & Schuster would taken all the air out of the anti-Amazon's crowds efforts to portray it as the enemy of traditional publishing.  Alas, it is not so.  The fear mongering continues.  And as long as there is fear mongering, the Fear-O-Matic will continue it's important mission.

First we'll take a look at a column by noted economist Paul Krugman that ran a couple days before the Simon and Schuster announcement.  It, and Amazon bashing in general, was quickly torn apart by an excellent piece by Matthew Yglesias on Vox.  That in turn was attacked by a piece on Salon by Emily Gould who, for some reason, made no mention of the Simon & Schuster revelation.  But then, it didn't seem like she bothered to put much work into it anyway.  The best refutal of her piece is simply to reread Matthew Yglesias because she didn't present any real arguments to his excellent points other than say, "Not!"  (Click to enlarge graphics.) 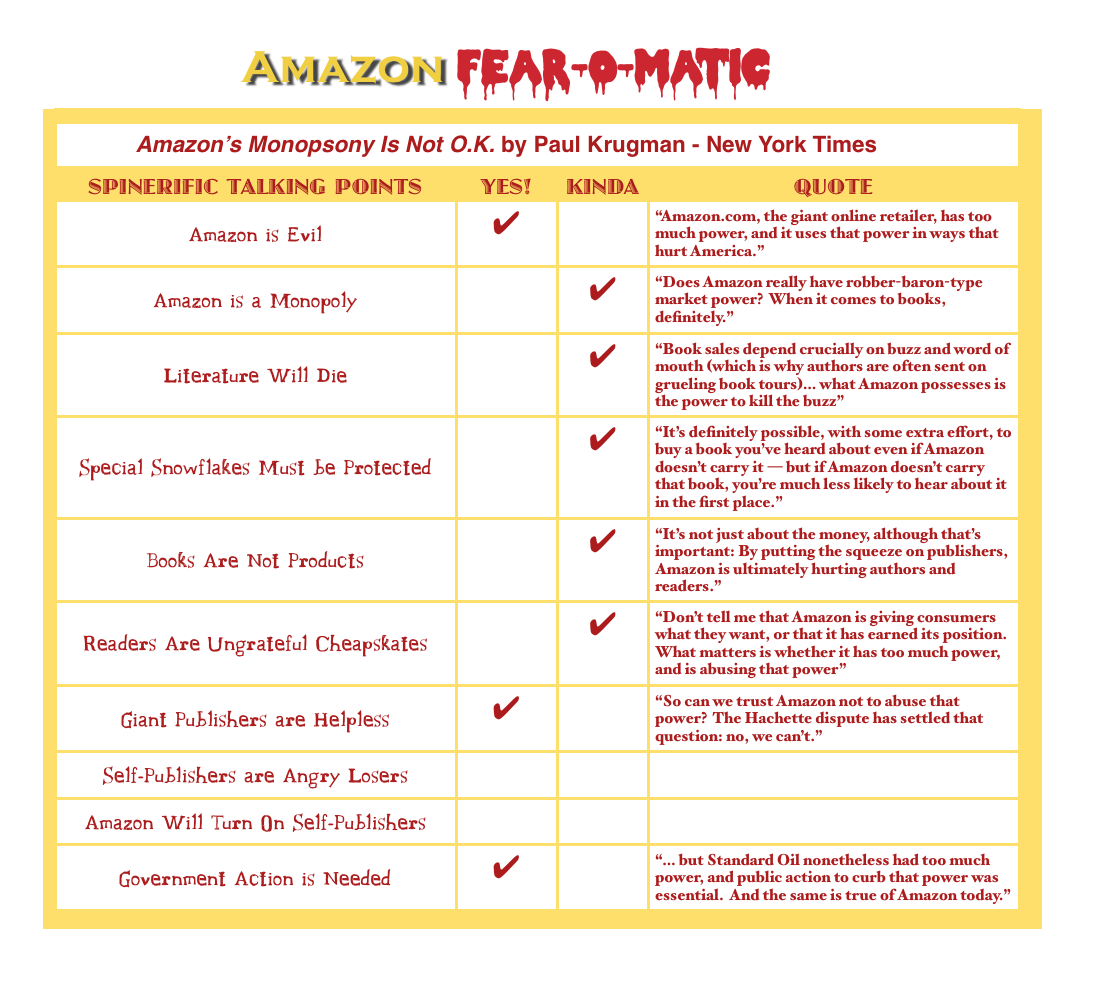 Krugman only hits a 5.5 on the Fear-O-Matic, mostly with half points for only "kinda" agreeing on the main anti-Amazon talking points.  It's clear his heart isn't in it.  But hey, he still wants those advances from the big publishers, so it was his turn to carry some water for the NY literary establishment.

Krugman argues Amazon isn't a monopoly, it's a "monopsony."  It isn't either, and Krugman knows it, but at least he proves he's a real economist by tossing around the word "monopsony," which sounds so much more economic than monopoly.  On non-economic matters he's even more shaky.  His main point is he feels government action is required because Amazon can be a buzz kill if it doesn't sufficiently promote the books of big publishers.  Why should Amazon be required to provide proper "buzz" for big publishers who refuse to make deals with them?  He doesn't explain.  Nor does he explain why some books should get this critical buzz and others (I guess self-published ones) don't deserve government protected buzz.  Or maybe he thinks every book should get buzz, but wouldn't it defeat the whole point of buzz if everyone got it?

There's this thing called "capitalism" that Krugman should look into now that he's got monopsony kinda covered.  It's where you pay money to get things.  The people who pay more, get more.  Like buzz, if you pay more (in advertising for example) and you get more buzz.  Maybe if the big publishers paid Amazon more money they would get more buzz?  Oops, that was the whole nature of the dispute.  So Krugman thinks Hachette shouldn't have to pay more to Amazon to get more buzz for their books?  Maybe instead of working on Amazon, the government should force Oprah to bring back Oprah's Book Club?  Or maybe TV and radio ads should be free to big publishers?  Oops, that would hurt their parent companies, who are giant media conglomerates.  Surely everyone would agree with Krugman that giant media conglomerates have no way of generating buzz unless the government steps in and forces Amazon to provide it. 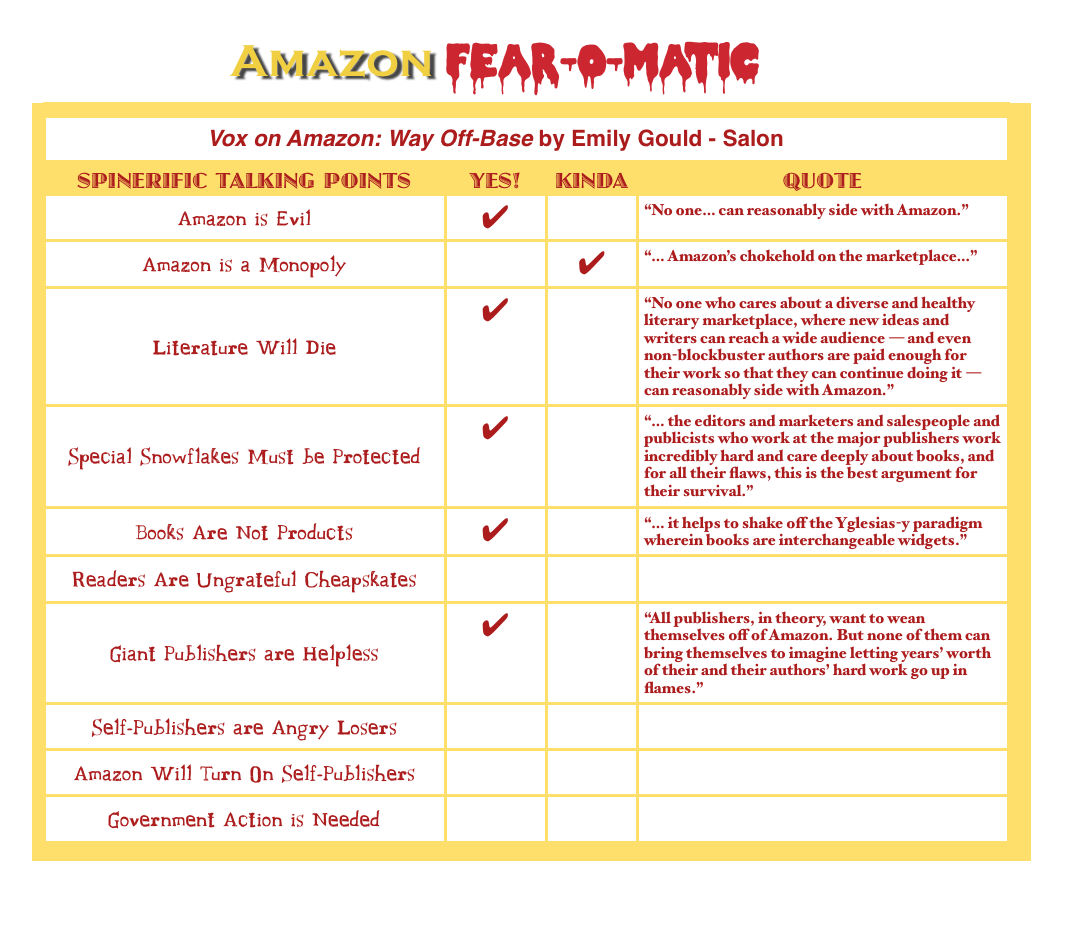 Gould also only makes a 5.5, less for being wishy washy like Krugman, but for being lazy and not really following up any of her arguments.  Once again, it is odd how the people writing these attack pieces seem to live in a bubble and rarely reference the larger debate or current developments.  I mean, if this is a subject that you really feel strongly about, how can you not mention what others have said about it?  Gould argues that "no one" who cares about literature and ideas can side with Amazon.  Really?  Does she really believe Hugh Howey and Joe Konrath and David Gaughran and Clay Shirky and all the seven thousand people that signed the petition against Author's United don't care about literature?  Or all the people commenting in favor of Amazon on Passive Voice?  None of them care about literature?  I mean, I get that this is just about proving you're on the side of the New York literary team.  That you don't really believe any of it, and know your pieces aren't serving any function.  But at least try to pretend you care.

Typical of these kind of half-baked efforts, Gould claims that Yglesias' strongest point is actually his weakest point, that Amazon already has a lot of competition in ebooks from Apple, Barnes and Noble, etc.  She says, sure, it does have a lot of competition but Amazon is winning anyway.  So she agrees with him.  What's so weak about his argument?  She admits he's completely right.  His argument is correct.  And, as he says, Amazon is winning because it is better.  She agrees.

The weak argument is hers, that for some reason, Amazon should be punished because it would simply be too hard for publishers to try to compete.  I mean, as she says, they would have to like lose money for a while and do other hard things.  Why should they have to do that?  Wouldn't it be easer if people just complained and Amazon stopped being so good at selling things?

Once Krugman gets done reading up on capitalism, maybe he can give Gould a quick lesson.