What's the Best Way to Format Your Self-Published Novel?

So I put up the latest episode of Eve's Hungry.  Lot's of great action and some fun surprises:

I'm calling them episodes for the blog, they'll be chapters in the novel when it's published.  (If I finish it, which I think I'm going to.  And if I publish it, which I'm determined to do.)  I'm having a heck of a time formatting them properly with Blogger, which is a great service, but quirky as heck.  I can't seem to get each chapter formatted in the same style of font and font size.  The old chapters seem to be locked up so I can't change them, and sometimes I make changes to fonts and they display differently.  Clearly I don't know some things I need to know, but I also know there are some bugs.  It's a downside to blogging the book I hadn't thought about.

But it brings up a larger issue.  How the heck am I going to format the entire book properly if I can't even get Blogger to do it.  I'm pretty smooth with word processors, but I've never tackled anything as big a a novel before.  It would seem simply, just throw all the words into one font and size, but I'm realizing it's a lot more complicated.

Each chapter has a chapter heading, I have "scene" headings within each chapter, and you have to be consistent about paragraph indents and the spaces between scene headings, etc.  A lot more to it than I realized at first.

I could probably make it work in Microsoft word or Apple's pages, but I've been reading a lot about how many serious self-publishing novelists use Scrivener, so I went ahead and bought a copy.  It's not cheap!  It set me back $45 bucks, but I guess that's a bargain compared to the ridiculous price Mircosoft still charges for the increasingly annoying Word on the Mac.

The question is, why, if I have all these other word processors, do I need Scrivener.  Well, to deal with all these quirkily little formatting details.  Scrivener is a kind of blend between a word processor and an outliner, and really seems to handle setting up chapters very nicely.  There's a huge learning curve, particularly sense it works in such a different way from Word, but I'm starting to like it.  So I think that's what I'm ultimately going to use when I try to output it for an ebook.

Now, you might say: "Hey, Mackay!  You're the ultimate Mac Fanboy!  Why don't you use iBook Author?"  Well, that's a good question.  I've been tinkering with it, and it's pretty cool, but seems mostly suited to mixing pictures and text.  For my first ebook, I want to keep the focus on text.  Also, it's so Apple centric, I'm not sure how well it will output stuff for Amazon.

While I'd love to eventually get the novel on iBooks, my main focus is Amazon.  Fanboy or not, everything I read says that all the real money is being made on ebooks for Amazon and Kindle, so I want to start there.

Anyhow, that's my latest update.  I'll keep you posted on how things work out with Scrivener.
Posted by Mackay Bell No comments:

I'm a huge Apple fanboy (as should be obvious from Eve's Hungry), so part of my daily routine is to check out the latest Apple news, either at MacDaily or AppleInsider.  That way I know what's cool, what's not, what's coming next in the world of Apple.

Now that I'm embarking on my journey into self-publishing, I'm trying to train myself to read up on the latest in that world.  I've looked at a lot of different sites and there's a ton of terrific information out there.  But the only site (at least so far) that I check out every day is:

It's run by Nate Hoffelder, and there are not only great daily links to articles but he writes really interesting and thoughtful commentary about the industry.  Particularly worth checking out are his regular "Morning Coffee" collections of links.  The site isn't focused only on self-publishing, rather it deals with all sorts of digital publishing issues including lots of tablet reviews.  But understanding what's going on in the larger area of digital publishing is pretty important to anyone hoping to self-publish, so I find just about everything he covers of at least partial interest.  And a lot of the info is must reading.  Be sure to check it out!
Posted by Mackay Bell No comments:

I posted a new chapter to the Eve's Hungry blog.  It's pretty funny.  You can check it out here:

Episode Five: Bite of the Apple

I love Blogger because it's free and pretty simple to use, but there are all sorts of formatting issues.  Particularly when you write something in a separate word processor and then try to paste it into Blogger.  It seems like you can never get the fonts right.  I'm looking forward to finally putting the book together and being able to format it as a whole.

I'm using Electric Gutenberg mostly as a kind of diary about the creation of my first self-published book, hoping it will turn out to be a smash success and then people will wonder how I did it.  So in addition to writing the chapters, I'm doing a little bit of promotion as I go along.  Mostly including links to the Eve's Hungry blog in the comments section of articles that I feel are relevant to the subject.  For example, I recently posted a comment on this web-article by Joshua Rivera:

Since Eve's Hungry is a futuristic story about how Google embraces evil, I figured there was some synergy in Rivera's piece.  So I put a little note in the comments section with a link: "Here's a really funny series of sci-fi stories set in the future after Google announces it fully embraces evil."  The hope was that people might click and enjoy the latest chapter of my book.

And it seemed to work.  Only a few dozen hits, but hey, free publicity.   I got 58 hits today and 35 yesterday, from zero a few days ago.  I have no idea if the hits will ever transfer into sales of my book some day, but I can hope.  At least it's a free way to get the word out and I can't see how it hurts.

Here's a screen capture of the traffic below: 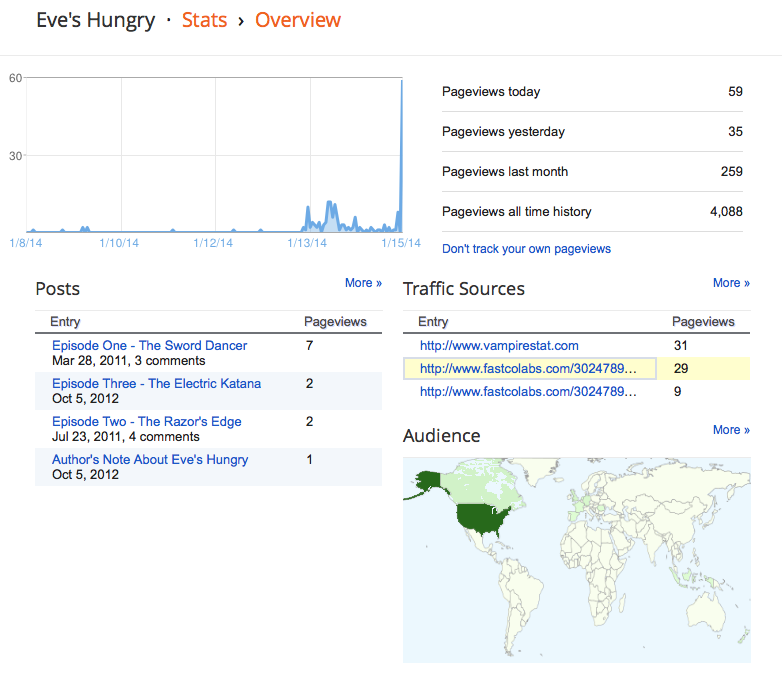 Posted by Mackay Bell No comments: